“Jamaican women are less likely to be a restraining factor over tobacco use at this time.”

According to the World Health Organization, women comprise about 20% of world’s more than 1 billion smokers. In Jamaica, an estimated 12% of the population are cigarette smokers. Among the adolescent population, the picture is most disturbing. In 2006, male and female adolescent use of any tobacco product increased to 20%. In the category of other tobacco products, female drug use moved from 6% in 2001 to 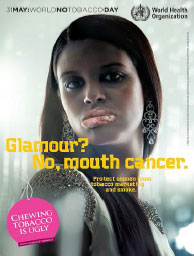 10% in 2006. Additionally, the favourability ratings of smoking among Jamaican female adolescents increased, mirroring the trend noted for males. Increasingly, both males and females reported that “boys and girls who smoke have more friends and are more attractive.” The findings show that Jamaican women are less likely to be a restraining factor over to bacco use at this time.

Reflection on tobacco use in a poor urban community
Most recently, the NCDA conducted a Rapid Assessment Survey in an “inner city community” to further explore patterns of drug use in that setting. We found further evidence of the stronger health seeking behavior of women when compared to men. In relation to cigarettes, all of the eighteen current female smokers who were interviewed indicated, without prompting, that they wanted to quit. For many, the high price of a cigarette was a major issue. The level of knowledge about the danger of tobacco use was high, many expressed fear of cancer and other health problems. Stress and “worries” were top of the chart of reasons for drug use. There a few who confessed that they used cigarettes “when mi hungry.” All the women interviewed purchase cigarettes by “the stick.”

Teenage smoking among Jamaican females
Cigarettes.-Tobacco dependence is considered a paediatric disease since most people begin smoking as young teenagers at which time they are likely to become dependent on the nicotine contained in cigarettes. The Global Youth Tobacco Survey (GYTS) conducted in 2006 among Jamaican teenagers classified 18% of females as current smokers of tobacco products. This rise of 4% over 2001 is of major concern. We discovered that current smokers of cigarettes remained constant at 12% while current use of other tobacco products skyrocketed from 6% to 19% among females. 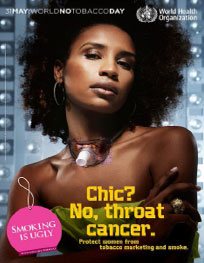 Beady (bidis). Beadies (bidis) are becoming extremely popular in Jamaica. They are handmade cigarettes made from tobacco wrapped in leaves of herbal plants. They come in various flavours, with sweet scents, and deceive users into believing that they are natural and safe. Smokers need to inhale more often to keep them lit and therefore inhale more of the harmful substances. Beady use in Jamaica is on the rise and stands at 14% of experiments among the adolescent population.

Cigars: Preferred by females employed in the business or tourism sector at the upper income levels. Use is viewed as “chic” and “stylish”.

Cigarettes and ganja a.k.a blem. The use of this combination is widely reported among the Jamaican population. More research is required into the cumulative impact of harmful substances contained in this combination.

We know much more about the pattern of tobacco use in Jamaica today and the prevailing attitudes toward second hand smoking. This knowledge should help us in combating the current efforts of the tobacco industry to recruit new users in developing countries. The WHO points to evidence that tobacco advertising increasingly targets girls. Stealthily, Jamaica women are being persuaded to join the ranks of tobacco smoking converts. We must work together to correct this negative trend.