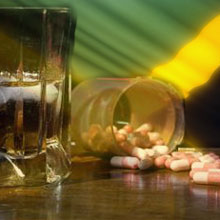 The National Council on Drug Abuse (NCDA) is raising the alarm that drug abuse may over-whelm national efforts to achieve the Millennium Development Goals. During November, Drug Awareness Month, under the theme, “Stop and Think-Drugs not the Link”, the agency will under-score the need for national action at all levels to con-front the many faces of drug abuse that now consti-tute a changing problem. Executive Director of the NCDA, Michael Tucker, believes that a multi-pronged strategy and national will is needed now more than ever to reverse emerging trends. After reviewing new data from national surveys, Mr. Tucker, said today, “We all have a lot of work to do. The problem of drug abuse is like a hydra. As soon as we make progress on one tentacle, another emerges.”

On November 1, 2010, Governor General, Sir Patrick Allen, signs the declaration of November as Drug Awareness Months. In the afternoon, during a media launch, major findings of the PAHO sponsored national surveys will be released at an event jointly planned with the Ministry of Health. On November 2, 2010, a dialogue on parenting against drug abuse dubbed “How are the children.” will be broadcast from Eden Gardens in Kingston, Jamaica.