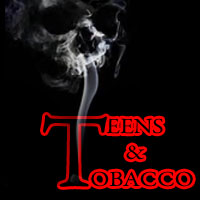 At the policy leaders dissemination session held on May 9, NCDA officials revealed troubling new data on substance use among students aged 13 and older.

The National Secondary School survey funded by the Organization of American States’ Inter American Drug Abuse Control Commission (OAS/CICAD) has been found to be a cost effective method of collecting current drug prevalence data. The objective of the survey was to determine the prevalence of psychoactive substance use, detect patterns of use, and to describe aspects related to the environment that protects or adds to the risk of drug use. The survey was last completed in Jamaica in 2006.

One key finding from the survey indicated that cigarette use has increased for lifetime and one-year prevalence since the last NSS survey (2006).

For the year 2013 30.8% of students indicated that they ever used Cigarettes. 10.8% smoked in the past year and 5.5% of them smoked in the last month. When the data was disaggregated by gender it was found that there were more male students reporting use (33.7%) than female students (28.3%) The data from six years ago conducted on the youth population showed that lifetime use was 24.6%, use within the last 12 months was at 8.3% vs a current 10.8% and within the last 30 days .

The table below shows the trends of cigarette use among teens from 1997. 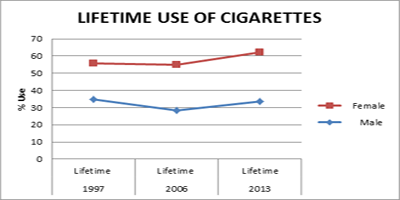 The survey also highlighted that the grade with the highest cigarette use was grade 10 with students ages 14-16.

The risks for youth smoking is significant. According to the World Health Organization (WHO) – Tobacco Free Initiative, the short-term health consequences of smoking include respiratory and non respiratory effects, addiction to nicotine, and the associated risk of other drug use. Long-term health consequences of youth smoking are reinforced by the fact that most young people who smoke regularly continue to smoke throughout adulthood. Cigarette smokers have a lower level of lung function than those persons who have never smoked. In fact on average, someone who smokes a pack or more of cigarettes each day lives 7 years less than someone who never smoked. Teens who smoke are three times more likely than nonsmokers to use alcohol, eight times more likely to use marijuana, and 22 times more likely to use cocaine. Smoking is associated with a host of other risky behaviors, such as fighting and engaging in unprotected sex.

The NCDA stands ready to partner with communities, schools, interest groups and families to develop strategies to lower the prevalence of smoking among Jamaican youth by equipping them with necessary life skills to live healthier happier lives.