The agency is embarking on a special summer communication initiative for public education and public relations. This is to reach 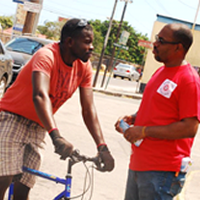 The NCDA is adopting the pop up concept as a part of our social marketing and Lifestyle branding campaign. A pop-up retail space is a venue that is temporary. The trend involves “popping up” one day, then disappearing anywhere from one day to several weeks later. The idea is to  create a unique environment that engages commuters with information and generates a feeling of relevance and interactivity.

The Refreshment Lounge also provides an opportunity for NCDA to refresh the commuting public with non-alcoholic beverages promoting the Council’s presence in the community. Our message is to take 5 minutes to reflect on youth drug use and how parental involvement/engagement can positively impact youth decisions to resist using substances. The public will receive refreshment during the experience.

The 2013 National Secondary School survey revealed the prevalence of 3 key substances among the youth population – alcohol, marijuana and cigarettes. Key to drug use and abuse in the youth population was the relationship that youth had with parental influences around them. The objective of the campaign is to target adults with the charge to get involved in the lives of youth around them before they begin to use substances.

The campaign is receiving primary media support through a social media campaign on Facebook & Instagram themed around – Where in the world are we today?  It will  highlight pictures of the life in that town and the pop up bar’s activities.