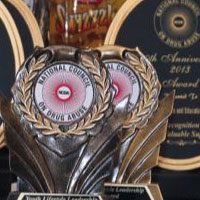 The Agency found pleasure in celebrating the leaders that inspired, influenced and impacted the area of substance misuse in Jamaica in a profound and lasting manner. The celebration was held on November 30, 2013 at the Pegasus Hotel in Kingston.

The Award for Inspiration was presented to the Most Honourable Edward Seaga for his insight, vision and responsive inspiration to form a National Council on Drug Abuse. The formation of this Council was designed to respond to the otential devastating impact of the drug problem. He called on parents, community leaders, church leaders and all people of goodwill to give total support to the campaign against drug abuse in Jamaica.

Professor Winston Davidson received the Influence award for under his leadership, the first comprehensive Strategic Plan for Prevention Treatment and Control was developed (1988-1992).

The Integrated Demand Reduction (IDER) Strategy was the brain child of Professor Davidson and was funded by United Nations Drug Control Programme (UNDCP) and was adopted as the model for the region. It was also the first time that there as such collaboration for drug prevention and treatment in the region.

Dr Charles Thesiger received the award for Impact . He was appointed the chairman of the Board of the National Council on Drug Abuse in 1994. It was under his leadership that the agency’s formal organizational structure and operational systems were developed. He paved the way for the council to become the local change-agent for substance abuse interventions in Jamaica. Dr. Thesiger was seen as a catalyst for regional cohesion as he was the point person for Caribbean colleagues, acting in the capacity as a mentor in the field of substance abuse prevention and treatment. He was also instrumental in the incorporation of treatment, rehabilitation and training at the University of the West Indies as well as regional training programmes.

Dr. Aileen Standard-Goldson was recognized for her INTENTIONAL commitment to the work of the Council. Over the years, she has maintained her passion for service to the agency. She is one of those individuals who can be relied on to stand as an advocate in her network of influence and is willing to heed the call of services whenever she is called upon.

Honourable, Dr. Fenton Ferguson, Minister of Health recognized for Most Impactful Legislation. He was commended for his genuine interest and commitment to protect the health of our population for generations to come.