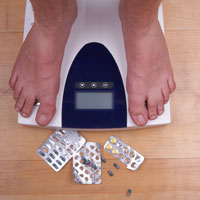 Research funded by the National Institute on Drug Abuse (NIDA) has found that the same brain mechanism that fuels drug addiction in humans may accompany the emergence of compulsive eating. According to Dr. Nora Volkow, Director of NIDA, “This research opens the door for us to apply some of the knowledge we have gathered about drug addiction to the study of overeating and obesity.”

The study conducted by researchers at the Scripps Research Institute among make rats found that brain receptors that play a key role in addiction also play a key role in heightening the brains response to food. The drop in the levels of brain receptors seen in obese rats was similar to the responses seen in humans addicted to cocaine or heroin. The researchers believe that drugs developed to treat drug addiction may benefit habitual overeaters.