Is the TOBACCO Industry MANIPULATING YOU?

The Tobacco Industry spends billions to market its deadly products each year.  Products are marketed through advertizing, promotion and sponsorship of many thing seemingly unrelated to tobacco. The manipulation lies in the goal behind these sponsorship activities. Advertizing promotion and sponsorship normalizes tobacco, making it seem like every other product. This increases its social acceptability and reduces the impact of efforts to educate people about its harmful effects.

In countries like Jamaica where partial bans prohibit the direct advertizing and promotion of tobacco products, tobacco companies frequently employ indirect marketing strategies such as:

The solution to break free from tobacco company “manipulation” is a a comprehensive ban of all tobacco advertising, promotion and sponsorship. This is required under the WHO Framework Convention for Tobacco Control (WHO FCTC)to which Jamaica is a signatory. Evidence shows that comprehensive advertising bans lead to reductions in the numbers of people starting and continuing smoking. Statistics show that banning tobacco advertising and sponsorship is one of the most cost-effective ways to reduce tobacco demand and thus a tobacco control “best buy”.

Countries that have implemented comprehensive bans have reduced tobacco consumption between 7-16%. 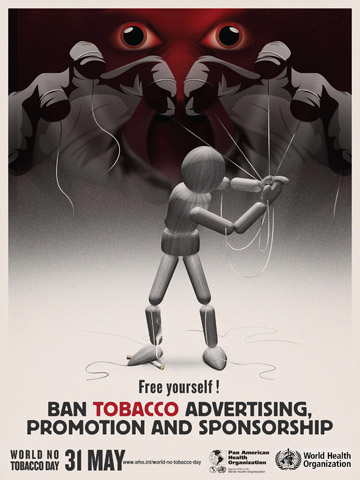