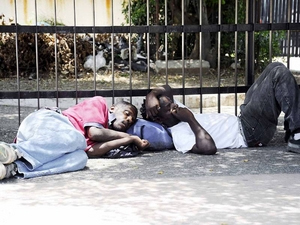 With a CVC/COIN Community Grant of US$20,000, Jamaica’s National Council on Drug Abuse (NCDA) trained and employed 10 homeless persons to work as a peer educators from August through November 2012 on a project called Tek it to Dem 2.

The peer educators had the following objectives:

The peer educators explained that the homeless persons found that the project was beneficial as there was a general distrust of strangers in the homeless community.  The use of peers to deliver the message made it more meaningful.  They were also grateful for the care packages as it met a fundamental need of the population for personal hygiene.  Personal hygiene is major problem for all homeless people because they do not have ready access to running water and they have nowhere to store bathing soap and washcloths. The packages came in bags they could easily store in their bed rolls. They were used to feeling ashamed of their bad hygiene and these products helped them clean up and work up the courage to appear in public. They explained, too, that using crack cocaine gives the body a peculiar odour that marks them as crack users to those familiar with this odour and that also repels people who are not crack users. They appreciated being able to wash off this odour with the soap and washcloths provided. Drug users were made aware of their options for detoxification and rehabilitation but none followed through with referrals because all treatment centres take the “cold turkey” approach and do not offer substitution therapy. However, both of the homeless peer educators who were still drug users said they had substantially reduced their drug use and they believed they were serving as inspiration to other homeless drug users.

The National Council on Drug Abuse is to be congratulated for its innovative approach in reaching marginalized populations with information on substance abuse prevention and treatment.