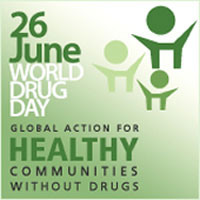 The United Nations’ (UN) International Day Against Drug Abuse and Illicit Trafficking is commemorated on June 26 each year.

The purpose of the day is to raise awareness of the major problem that illicit drugs represent to society. This day is supported by individuals, communities and various organizations all over the world.

The National Council on Drug Abuse (NCDA)  joins with the Ministry of Health and the Ministry of National Security to focus the nation’s attention on the negative effects of Drugs and Crime on the country.

The United Nations General Assembly on Drugs and Crime in a background document on the celebrations, indicate that  “criminal influence and money are having a significant impact on the livelihoods and quality of life of citizens, most particularly the poor, women and children.”

Transnational organized crime and drug trafficking is of growing concern for all countries, they are concerned particularly for illicit trade’s broad impact on development. Drug trafficking has particularly severe implications because of the vast illegal profits it generates.  In several drug production and transit regions, criminal groups undermine state authority and the rule of law by fuelling corruption, compromising elections, and hurting the legitimate economy.

The impact of drugs and crime also directly impacts on countries socially as potential of victimization can encourage skilled labor to leave, and also restrict the productivity of those who remain through the threat of victimization. Drugs and crime also undermine development by driving away business. Both foreign and domestic investors see crime as a sign of social instability, and crime drives up the cost of doing business. Tourism is a sector especially sensitive to crime issues. Drugs and crime, moreover, undermine the ability of the state to promote development by destroying the trust relationship between the people and the state, and undermining democracy and confidence in the criminal justice system.

The agencies in Jamaica will be using every opportunity to focus local attention on these issues on June 26.