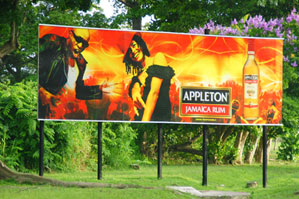 An estimated 666,000 persons in Jamaica have problems related to alcohol abuse and over two thirds of Jamaican adolescents have experimented with alcoholic beverages. Alcohol abuse is directly associated with several deleterious physical and psychological consequences.

Marketing practices that may drive alcohol are a cause for concern. Theories posit that advertisements prime adolescents for a point later in their lives when alcohol becomes available to themand drinking is reinforced by other societal factors. The NCDA conducted a billboard survey in February 2008 to examine the content of this mediumand to study the appeal strategies employed by advertisers.144 small, mediumand large billboards along the main corridors across Jamaica were surveyed for messages and images.

The Survey found that, related to alcohol, beers (46%) were most highly advertised, followed by rum(21%) and wines (4%). Human subjects appeared as young adults. The language used connoted real living, adult entertainment and stamina. The boards were found in close proximity to homes, playfields and schools respectively.

Findings correlate with similar studies on such billboard promotions and concerns that young people may be attracted to consume these products since adolescents are prone to imitating adult behaviour. Adolescents might conclude that it is acceptable to drink when they get older. Aggressive prevention programmes are required.