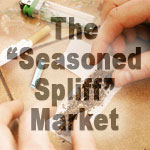 A ganja (marijuana) spliff peppered with crack cocaine is a “seasoned spliff” joint. The brand has been expanded to include “lizard tail” that adds mystique to the product. The marketers of illicit drugs in Jamaica are proffering embellishments. With deadly earnest, they are marketing their products and building on synergies to seduce a new set of users. Their stealth is evident as many naïve users do not know that cocaine, has been added to that ganja spliff.

Studies show that marketers of illegal drugs are consumer savvy. They “cut and adulterate” theirproducts to reduce price: they mask the deadly nature of their merchandise by proclaiming its safety. They react to successes in prevention by increasing sampling and generating new brands. The “bling” and “flash” of their lifestyle is part of an overall marketing strategy to draw young people. Sadly, young people find out that they have acquired a habit for a blend of drugs after it is too late.

The NCDA and its allied agencies have done a good job in controlling cocaine use to less than 0.1% over the last 20 years. However, this combination of ganja and cocaine has the potential to erase these gains. Surreptitiously, ganja is used as the leaven loaf to deliver crack cocaine to the young and naïve user. According to the 2006 National Schools Survey commissioned by the National Council on Drug Abuse (NCDA), 6 percent of young Jamaicans have experimented with “seasoned spliff” while 2 percent have used the drug in the last 30 days. Additionally, 25 percent have tried ganja or 3 percent have tried cocaine exclusively. The study shows cocaine use falling in grade 10 but increasing in grade 11 as cocaine use tapers off across grades 8 to 11. This may be a glitch that is peculiar to this study. However, the use of these drugs across the grades needs to be closely monitored and addressed. Other worrying signs include the narrowing of the gap between male and female use and the behavioural problems and educational attainment issues associated with drug use. Only one out of 20 students who have tried “seasoned spliff” believe that it is very likely that they will finish school. It is time to pay attention to these drug cocktails that are designed by the sellers of illegal drugs to exploit the cultural acceptance of ganja use in Jamaica.

Time for a common sense response.

DrugTALK Jamaica is prepared and distributed by the Information and Research Division, NCDA, September 7, 2009, ncda@cwjamaica.com.