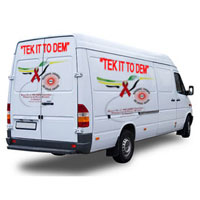 The NCDA’s new project transports homeless persons on a daily basis to established centres so that they can get a bath, meal, first aid and testing. Arrangements are in place for testing of blood samples at the Comprehensive Health Centre. Beyond this, the team accesses anti- retrovirals from existing health centres for the homeless persons who need these medicines. The new initiative has attracted support from various organizations who serve the needs of the homeless such as the Kingston and St. Andrew Corporation, Bellevue’s Open Arms Shelter, CHARES, Missionaries of the Poor, Jamaica AIDS Support, Webster Memorial, New Kingston Civic Association and Richmond Fellowship.

This first phase of the NCDA designed initiative is funded for nine months through the Ministry of Health’s Global Fund Grant. The pilot aims to assist 500 persons of No Fixed Abode (PNFAs). The prevalence of drug abuse and HIV/AIDS among PNFAs is to be documented. Mapping of the groups preferred location and patterns of migration will be recorded using Global Positioning technology.

The staff of the NCDA has coined the term “Tek it to dem” to describe the intent of the outreach. “Drug abuse is no respecter of persons. We have a client who has post graduate qualifications and is multitalented. Persons from all classes are out there.” Brown said. There are some signs of shifting patterns of drugs that are abused. The officers report low levels of drug injecting on the street, such as heroin. Crystal meth a.k.a ice., use among small pockets of the population has been detected. “We are glad that the HIV/AIDS programme has made it possible to reach a very vulnerable population. That is the reality,” he stated. The new project will give homeless people the care and attention needed to fight HIV/AIDS. The NCDA has found a new way to fight drug addiction that continues to derail many Jamaican lives.