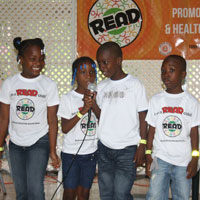 In an effort to prevent drug use among Jamaican youth, the National Council on Drug Abuse (NCDA) recently completed the Resistance Education Against Drugs (R.E.A.D.) project among 500 children aged five to seven in 25 schools across Jamaica. The initiative was funded through a grant of $5.2 million from the National Health Fund.

The project was evidenced based in response to NCDA research that has shown significant experimentation with legal and illegal substances among school-aged youth from as early as 10 years old. The overall goal of the READ programme was to provide the participants with the knowledge to recognise negative behaviours linked to drug use and practice refusal skills. The proactive approach is expected to stem the prevalence and onset of drug use among youth by equipping them with life-skills that act as protective factors against drug use and overall risk-related behaviours.

Topics such as self-awareness, resistance and decision making skills and age appropriate drug and health information were delivered by trained guidance counsellors and class teachers in participating schools. Each school had a total of twenty (20) grade one students who were provided with resource materials such as workbooks, colouring material and CDs to support the reinforcement of topics covered by READ facilitators.

The programme featured a quiz competition that assessed the extent to which the students assimilated the information taught in the programme. Quiz teams comprised of four members out of the twenty student participants from each school. Twenty-one quizzes were held in the Eastern, Central and Western regions during the month of May and culminated in a national quiz competition held on June 6th 2013 at the Turtle River Falls and Gardens in Ocho Rios. Schools which topped the competition were: Four Paths All Age – Clarendon (Central Region); Bogue Hill Primary – St. James (Western Region) and Windward Road Primary and Junior High (Kingston – Eastern Region). The national winner was Windward Road Primary and Junior High. All quiz teams from the 25 schools participated in a fun day at the Turtle River Falls and Gardens on the day of the final quiz competition.

Teachers and guidance counsellors have lauded the program as unique and vital in building awareness and skills among their students. They also emphasized the need for scaling up the initiative to include other grade levels and more schools in their parishes. The NCDA wishes to thank the National Health Fund for providing funding, READ facilitators for their tireless and
innovative efforts, school administrators for their support to implement the program in their schools and most of all, the grade one students who activelyparticipated in and embraced the programme. Progress toward creating drug-free lifestyles has been made among this group of children. The establishment of drug-free clubs and training of peer-counsellors to sustain the efforts of the agency are being explored with the participating READ schools in order to create a sustainable mechanism to address the issue of drug awareness and education.