Health Risks for Women who Smoke

Lung Cancer
■  Each cigarette contains about 4000 compounds, out of which about 400 are poisonous and as many as 25 of these are carcinogenic or cancer causing. Of all the kinds of lung cancer, about 15 percent are life threatening and are all caused due to smoking.  Lung cancer is the biggest reason of death amongst all women, having surpassed other forms of cancer like breast and cervix. This kind of cancer normally spreads very quickly to the other vital parts of the body such as brain, liver and bone. Since this form of cancer spreads quickly, usually all patients are subjected to chemotherapy as soon as the cancer is diagnosed. 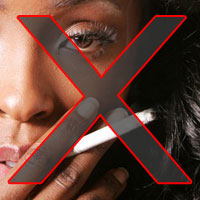 ■  The bad news doesn’t end here; this cancer is so deadly that only about 6% of the people are still alive 5 years after the cancer has been diagnosed.

Cardio Vascular Diseases
■  Middle aged women who smoke are at risk of cardio vascular diseases thrice as likely as non smoking women. Recent studies also suggest that female smokers suffer from heart diseases much sooner than men. While cardio vascular diseases like heart attacks, blood pressure and strokes could be caused by multiple factors, smoking definitely is amongst the top few contenders.
■  Presence of poisonous substances like nicotine, tar and carbon mono oxide in cigarettes cause the heart rate to increase temporarily, straining the heart to beat faster and the blood pressure to shoot up; it may also result in blood clots in legs and other parts of the body which when they travel may cause strokes. It is also known that the oxygen flow to all parts of the body including the heart, is reduced and contaminated, often leading to the heart functioning below the optimal level.

Infertility & Pregnancy
■  Infertility refers to the inability to conceive or when conceived, retain pregnancy beyond the first few weeks. Late age is one of the major causes of infertility apart from other medical conditions. If late age is coupled with smoking, the results could be disastrous. Presence of poisonous substances in cigarettes, affect the quality of the fluid present in the uterine cavity and which is responsible for sustaining the growth of the embryo. It may also be toxic for the sperms, resulting in difficulty in getting pregnant and implantation of the embryo to the uterus.
■  Furthermore, if you continue smoking when you are pregnant, the growth of the fetus may be either retarded or slow and may even result in lesser birth weight, pre term delivery and sometimes miscarriage.

Menstruation and Menopause
■  Habitual smokers experience menopause sooner by 4-5 years than non smokers. Apart from this, instants of irregular periods, absence of periods (not associated with menopause) or abnormalities during the cycle are common in smoking women. This may be caused due to the toxic effect of cigarettes on ovaries and hormones, disturbing their normal pattern of functioning.

Osteoporosis
■  Osteoporosis refers to a condition, where the bones become weak and fragile enough to break in normal day to day functioning. While osteoporosis is caused by low calcium levels, in women who smoke, this is a potent threat. Smoking directly affects the bone density of the body and absorption of calcium is also tampered with.
■  Women smoking a pack of cigarettes per day, over a period of time, tend to have bone density almost 10 percent lower to their counterparts who do not smoke.

Cancers of the Breast, Cervix and Vulva
■  While we have discussed lung cancer above, there are a few more kinds of cancers which the women expose themselves to when they smoke. The reason of their occurrence is simple, presence of toxic substances in the cigarettes cause the body’s defense mechanism to start focusing on killing the toxins and thereby, reducing the production of hormones and fluids that it requires to function normally.
■  Research shows that if you smoke, chances of having breast cancer increase by 25 percent, vulvar cancer by 40 percent and cervical cancer by as high as 75 percent.

Ageing and Dental Effects
■  Smokers have an increased risk of plaque build up, stained teeth, bad breath, tooth decay and smelly and swollen gums, apart from the deadly oral cancer. Smokers tend to develop wrinkles faster than non smokers due to inefficient nutrient absorption done by the body.
■  Second hand smoking or passive smoking, as it is more commonly called, refers to the harmful effects of smoke caused due to someone else’s smoking. Research suggests that passive smoking has equally dangerous health conditions as active smoking. If you are a passive smoker, you should put your foot down and ask for the smoker to step out from the room /quit smoking.

Advice to all smokers out there and smokers who are trying to quit and need some boosting words – stop now while you can!  Wouldn’t you, if you know that it causes only harm to your body and causes absolutely NO good! Wouldn’t you, if you are told that each cigarette that you enjoy for 5 minutes is responsible for cutting down your life span by an equal number of minutes!