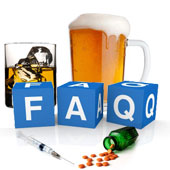 What is marijuana? Are there different kinds?
Marijuana is a green, brown, or gray mixture of dried, shredded leaves, stems, seeds, and flowers of the hemp, or cannabis, plant. It goes by many different names—pot, ganja, herb, weed, grass—and stronger forms include sinsemilla (sin-seh-me- yah), hashish (“hash” for short), and hash oil.

How does marijuana exert its effects?
All forms of marijuana are mind-altering (psychoactive). In other words, they change how the brain works. Marijuana contains more than 400 chemicals, including THC (delta-9-tetrahydrocannabinol). Since THC is the main active chemical in marijuana, the amount of THC in marijuana determines its strength or potency and therefore its effects. The THC content of marijuana has been increasing since the 1980s.

How long does marijuana stay in your body?
The THC in marijuana is rapidly absorbed by fatty tissues in various organs throughout the body. In general, standard urine tests can detect traces (metabolites) of THC several days after use. In heavy users, however, THC metabolites can sometimes be detected for weeks after use stops.

Does marijuana use lead to other drugs?
Long-term studies of drug use patterns show that very few high school students use other illegal drugs without first trying marijuana. However, many young people who use marijuana do not go on to use other drugs. Among those who do, here are some theories:

What happens if you smoke marijuana?
Some people feel nothing at all when they smoke marijuana. Others may feel relaxed or high. Some experience sudden feelings of anxiety and paranoid thoughts (more likely with stronger varieties of marijuana). Regular use of marijuana has also been associated with depression, anxiety, and an amotivational syndrome, which means a loss of drive or ambition, even for previously rewarding activities. Marijuana also often makes users feel hungry. Its effects can be unpredictable, especially when other drugs are mixed with it.

In the short-term, marijuana can cause:

But marijuana affects each person differently according to:

What are the activities/behaviors most likely to be affected?
Learning: Marijuana’s effects on attention and memory make it difficult not only to learn something new, but to do complex tasks that require focus and concentration or the stringing together of a lot of information sequentially.
Sports: Marijuana affects timing, movement, and coordination, which can throw off athletic performance.
Judgment: Marijuana, like most abused substances, can alter judgment and reduce inhibitions. This can lead to risky behaviors that can expose the user to sexually transmitted diseases like HIV, the virus that causes AIDS.

What does marijuana do to the brain?
We know a lot about where marijuana acts in the brain and how it exerts its effects at specific sites called cannabinoid receptors. These are found in brain regions that influence learning and memory, appetite, coordination, and pleasure. That’s why marijuana produces the effects it does. We know much less about what happens to the brain in the long run, when someone is a regular marijuana smoker.

Scientists use brain imaging techniques to study the living human brain, but we are still in the early stages of that research when it comes to marijuana. So, while differences show up in the brains of marijuana users (versus nonusers), we do not yet know what these differences mean or how long they last—especially if someone stops using the drug. One reason is that it’s hard to find marijuana-only smokers who do not also abuse alcohol—which has its own negative effects on brain function.

How does smoking marijuana affect the lungs?
Someone who smokes marijuana regularly may have many of the same respiratory problems that tobacco smokers do, such as daily cough, more frequent upper respiratory illnesses, and a greater risk of lung infections like pneumonia. As with tobacco smoke, marijuana smoke consists of a toxic mixture of gases and tiny particles, many of which are known to harm the lungs. Although we don’t yet know if marijuana causes lung cancer, many people who smoke marijuana also smoke cigarettes, which do cause cancer—and smoking marijuana can make it harder to quit tobacco use.

Can marijuana affect the developing fetus?
Doctors advise pregnant women not to use any drugs because they could harm the growing fetus. Studies suggest that children of mothers who used marijuana while pregnant may have subtle brain changes that can cause difficulties with problemsolving skills, memory, and attention. More research is needed because it is hard to say for sure what causes what: for example, pregnant women who use marijuana may also smoke cigarettes or drink alcohol, both of which can also affect fetal development.

Does marijuana produce withdrawal symptoms when someone quits using it?
Yes. The symptoms are similar in type and severity to those of nicotine withdrawal—irritability, sleeping difficulties, anxiety, and craving—peaking a few days after marijuana use has stopped. Withdrawal symptoms can make it hard for someone to stay off marijuana.

What if a person wants to quit using the drug?
Researchers are testing different ways to help marijuana users abstain from drug use, including developing medications. Current treatment programs focus on counseling and group support systems. There are also a number of programs designed especially to help teenagers.

Isn’t marijuana sometimes used as a medicine?
Several states in the USA have passed medical marijuana laws, but marijuana has not been approved by the Food and Drug Administration (FDA) to treat any diseases. Even so, we know that the marijuana plant contains ingredients that could have important medical uses. Currently, two pill versions of THC, marijuana’s psychoactive ingredient, have been approved to treat nausea in cancer chemotherapy patients and to stimulate appetite in some patients with AIDS. Also, a new product called Sativex is available in the United Kingdom and Canada as a mouth spray. It is a chemically pure mixture of plant-derived THC and cannabidiol (another chemical found in the marijuana plant) approved to relieve cancer-associated pain and spasticity and nerve pain in multiple sclerosis. However, it’s important to remember that because marijuana is usually smoked and has ingredients that can vary from plant to plant, the associated health risks may outweigh its value as a treatment. Scientists continue to investigate the medicinal properties of THC and other manmade or plant-derived cannabinoids to better evaluate and harness their potential to alleviate suffering, while avoiding the harmful effects of smoking marijuana, including addiction.