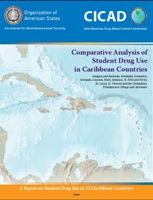 In the 2003 – 2004 hemispheric report1 of the Multilateral Evaluation Mechanism (MEM) there are two statements which are difficult to refute. The first was about national drug information systems:

“To be able to confront a problem it is important to understand its dimensions and characteristics.”

The second statement was about statistics on drug consumption:

These two statements taken together serve to strongly justify the work that has gone into the publishing of the information in this report which represents an important step forward in the generation of drug consumption statistics in the Caribbean.

This report is the synthesis of 12 separate but similar studies that were implemented in 12 countries between 2005 and 2007, using one of the protocols of CICAD’s Inter-American Drug Use Data System (SIDUC). The protocol outlines the methodology for implementing drug prevalence surveys among secondary school students. All except one of the surveys were implemented in 2005 and 2006. Guyana’s survey was done early in 2007.

While we have had a few published country reports of studies done in some of the countries, there are very few examples of published work that looks comparatively at drug use among groups of countries or the Caribbean region as a whole, and this type of analysis may be seen as an indication of the direction that the Inter- American Observatory on Drugs (OID) will be going in the future.